As most mothers in the animal kingdom the, a  cow  in this case, can be very protective of its new born. Once or twice a day Dad would go out to check on the dry cows. Those are cows that are between lactations awaiting the birthing of the next generation. On occasions I would go with him to help bring in the new born calves, usually carried, and the mothers so they can begin producing milk. Dad would pick up the calf and usually the momma cow would just follow out of concern for it baby.

Well being only about four feet tall at the time I must have been seen as a threat to that one cow, much like a coyote or something. Dad picked up the calf and as soon as he had it securely in his arms that momma cow turned on me.

I thought I was a goner. She blew out of her nose and came for me like a Mack Truck. Eyes popping out and nostrils flared with her head down. I was scared, scared for my life. I ran for the fence to avoid the impending trauma I was about to endure. Not looking back, but focused on the fence. If I can only make it to the fence I would be safe. It was close now and I dove under the cables. I was safe, yes safe! 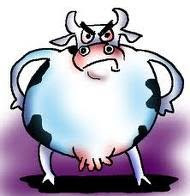 I turned around expecting to see that cow glaring at me from the other side of the fence angry that if missed it’s prey. What? No cow? She was doing what most of them do. Following Dad with its calf! Dad was laughing at me saying, “What are you afraid of”. It must have looked funny to him because I seem to be running away for no reason. Feeling silly I vowed to me more brave the next time.

Later as an adult managing a dairy in New Mexico there was a cow that just calved and was mean!  She was hard to get close to, let alone getting her calf.  So with some deliberation I got several people to help out with this CRAZY cow.  With long poles like the handle of a pitch fork.  We were able to get the two apart.  After that that cow settled down and just acted like the other cows…

That was fun and exciting.